Levi’s story begins in a tiny little village in Clarendon, Jamaica. As a young boy, Levi helped his grandmother in the kitchen. She taught him the secrets and subtleties of mixing Caribbean flavours, herbs and spices. During this time, Levi also discovered his love for music at the church his grandmother sung at. 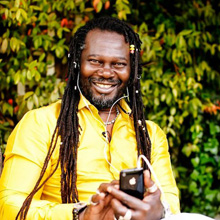 While Levi lived with his grandparents in Jamaica his parents were in Brixton working hard so that Levi and his five older siblings could move to England. Every year they would send for another child from the eldest to the youngest. Eventually it was Levi’s turn to leave Jamaica.

In London Levi went to school for the first time and also visited the Notting Hill Carnival,

“I loved the music, the food, the colours.”

Little did he know that he would later have his own stall at the festival selling the Reggae Reggae Sauce that would make him his fortune! 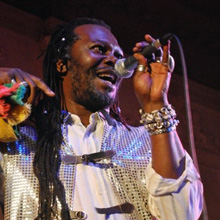 For years Levi made the sauce from his kitchen in Brixton with the help of his seven children, selling his overwhelmingly popular sauce out of bag on his back.

At 1991’s Notting Hill Carnival Levi created a fusion between the food he was cooking and the music he was playing, opening the ‘Rasta’raunt’, which was so popular it is now an annual fixture at Carnival. Despite the sauce’s popularity it took another 16 years of rejection from banks and businesses to invest in the product who thought it looked and sounded “too black”.

In 2006, Levi was spotted at the World Food Market by a BBC researcher and invited to appear on the programme Dragons’ Den. Levi had never even heard of the show, and went home to his kids asking them what Dragons’ Den was. They begged him not to appear saying; Dad, don’t go on that show, they’ll just tear you to pieces!

Although he was doubtful about the programme, Levi’s mother encouraged him to come back as a ‘Dragon Slayer’. Levi put his faith in Reggae Reggae Sauce to win over those fiery Dragons. 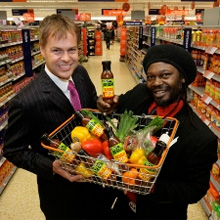 The sauce was an instant hit. In exchange for a 40% stake in his business, he secured the support of millionaire ‘Dragons’, Peter Jones and Richard Farleigh for £50,000. Peter Jones helped to get the sauce listed by Sainsbury’s, turning the dream into a reality.

Levi’s success has been nothing short of a whirlwind and he has even been invited by Prime Ministers to no.10 in recognition of his notable success as a black man in Britain attaining financial achievement through enterprise. Levi equates his success to putting himself into the product.

“I will never forget that little paradise Content (in Jamaica) and my saintly grandmother, who helped to make me the success I am now.” 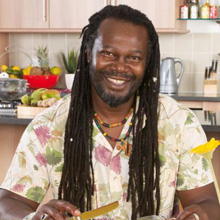 Levi’s main focus has been to promote the Reggae Reggae brand and the message it symbolizes. ‘I want to spread the word that if a black Brixtonian Rastafarian can make it with just a sauce, then you can make it too.’

The Levi Roots range continues to grow with Caribbean inspired cooking sauces, ready meals, soft drinks, desserts and more. Numerous high profile restaurant chains have signed deals with Levi to use the sauce on their menus including Wetherspoons and other high street franchises

In 2008, Levi hosted his debut TV series ‘Caribbean Food Made Easy’ in which he aimed to make the vibrant tastes and healthy ingredients of Caribbean food more accessible, and it was accompanied by his iconic book of the same name.

As well as cooking, Levi continued to fulfill his passion for credible roots music by releasing his studio album ‘Red Hot’ with its catchy summer single ‘So Out Of My Mind’, in 2009. 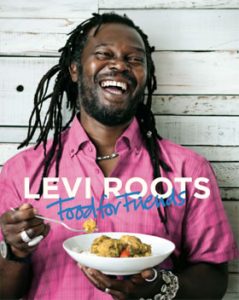 With seemingly endless possibilities for the popular Levi Roots brand, Levi continues to bring the sunshine of the Caribbean to all of his ventures while popularizing the spicy flavours of his Jamaican heritage….Always focused and ever motivated Levi Roots remains true to his inspired mantra of success, ‘Put some music in your food!’

Along the way, Levi has managed to pack in a great deal! In 2013, he launched his School of Life Tour, taking his message to children all over the country, inspiring them to follow their dreams and showing them how to make tasty, healthy food. He has published six cookbooks and a business book, released a new album.

Levi felt incredibly privileged to made an Honorary Fellow of the Royal Agricultural University (RAU) for his continued contribution to entrepreneurship and food.

Professor Jo Price, VC of the RAU said “ Levi Roots is a visionary, a leader whose contribution to society and duty of service go hand in hand with his professional success. He is an inspirational role model for our students and we are delighted to welcome him to our community of Honorary Fellows” 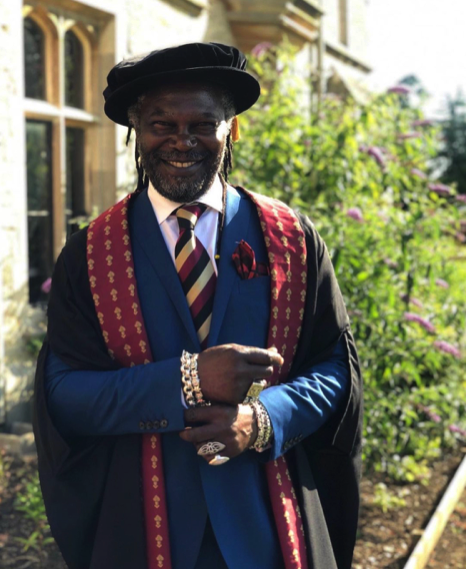 Levi was delighted to be approached by the amazing writer- producers Meg Leonard and Nick Moorcroft who want to make a film about Levi’s life story. A real life rags to riches tale which will follow Levi’s story from a poor young boy in Jamaica with no formal education to being thrust into life in the Uk, age 11. The rest is history as they say! 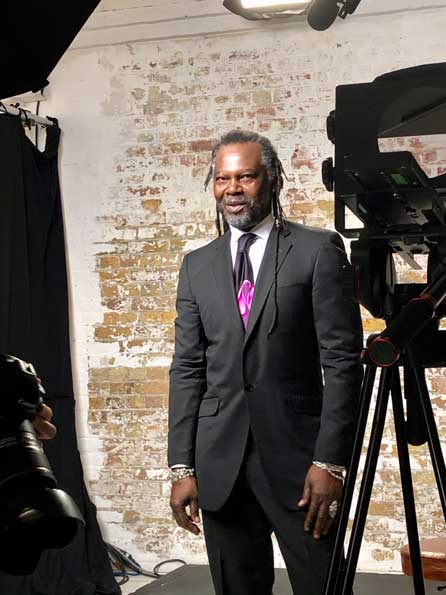 Levi Roots is the narrators voice for the BBC documentary “Studio 17: The Lost Reggae Tapes”

A long time ambassador for the Prince’s Trust. Levi is often asked to attend the annual awards ceremony at Buckingham Palace to present the hard earned awards alongside attending other events throughout the year.

Levi is very happy to give his time to this amazing charity that supports young people get their lives on track.

Celebrity Mastermind. Levi appears once again on this family favourite.

June 4th Levi joins up with The Scouts and The NCS for a BB-Thank-you as part of the UK’s biggest ever thank you party, as local communities, members of the public, celebrities, politicians and more take part in the country’s first ever national Thank You Day. 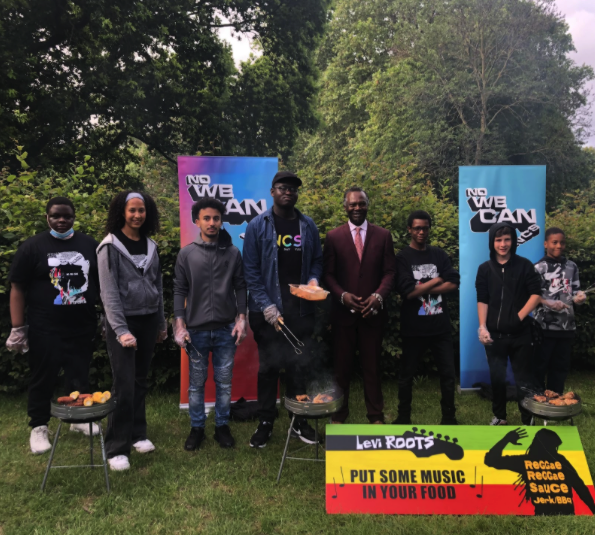 “Carnival culture has always been central to my experience and business – it’s the perfect blend of music and food – two things I am very passionate about,” 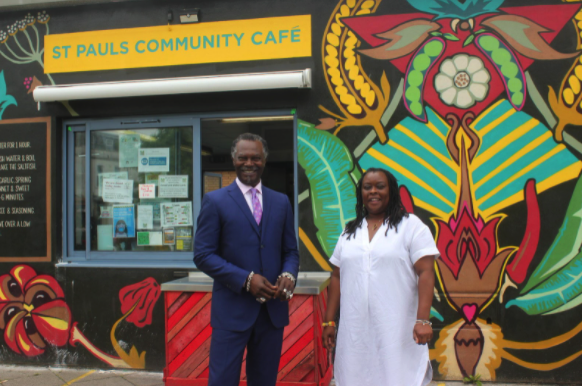 2021
We use cookies on our website to give you the most relevant experience by remembering your preferences and repeat visits. By clicking “Accept All”, you consent to the use of ALL the cookies. However, you may visit "Cookie Settings" to provide a controlled consent.
Cookie SettingsAccept All Reject All
Manage consent

This website uses cookies to improve your experience while you navigate through the website. Out of these, the cookies that are categorized as necessary are stored on your browser as they are essential for the working of basic functionalities of the website. We also use third-party cookies that help us analyze and understand how you use this website. These cookies will be stored in your browser only with your consent. You also have the option to opt-out of these cookies. But opting out of some of these cookies may affect your browsing experience.
Necessary Always Enabled
Necessary cookies are absolutely essential for the website to function properly. These cookies ensure basic functionalities and security features of the website, anonymously.
Functional
Functional cookies help to perform certain functionalities like sharing the content of the website on social media platforms, collect feedbacks, and other third-party features.
Performance
Performance cookies are used to understand and analyze the key performance indexes of the website which helps in delivering a better user experience for the visitors.
Analytics
Analytical cookies are used to understand how visitors interact with the website. These cookies help provide information on metrics the number of visitors, bounce rate, traffic source, etc.
Advertisement
Advertisement cookies are used to provide visitors with relevant ads and marketing campaigns. These cookies track visitors across websites and collect information to provide customized ads.
Others
Other uncategorized cookies are those that are being analyzed and have not been classified into a category as yet.
SAVE & ACCEPT
Menu